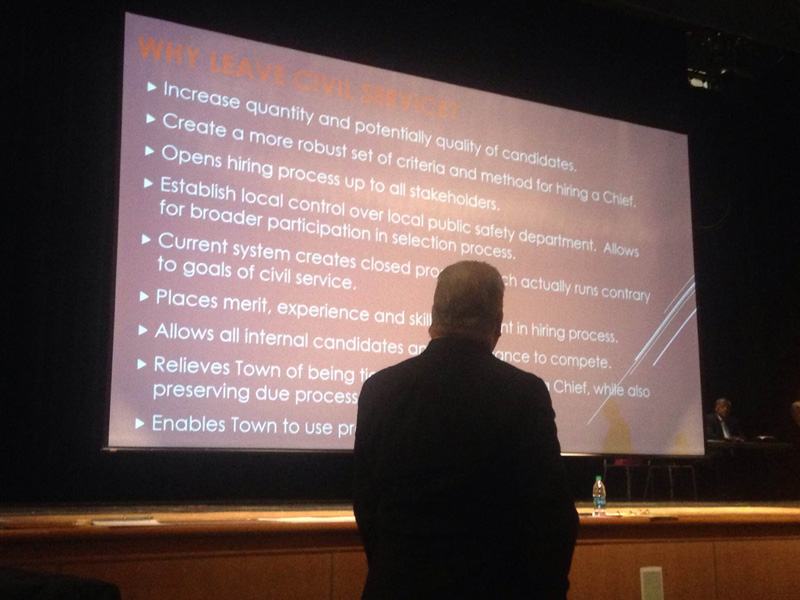 The Lowell Sun political gossip column this moring headlined with the Dracut Town Meeting discussion on the article about removing the Police Chief from civil service.

For an issue that would not apply to him, Chief Richardson seemed to take it most personally, and all the officers in the audience seemed to have an ongoing grudge against former police officer, now Selectman Tony Archinski.

MONDAY WAS not, perhaps, the finest night for Dracut’s finest serving as role models.

A large contingent of police officers, firefighters, and their families marshaled for Monday’s Town Meeting to strike down Town Manager Jim Duggan’s proposal to remove the police chief’s position from Civil Service protection.

It was an emotional night, and at times the animosity seemed to boil over.

For one, Selectman Tony Archinski, a retired police officer who was once passed over for the chief’s position and is no friend of the current police leadership, stood to speak in favor of the proposal. Boos rained down from the corner of the auditorium where police officers were sitting.

Police Chief Kevin Richardson said, “Oh, this a******,” loudly enough for those sitting near him to hear.

As Archinski wrapped up, Richardson joined the chorus of dissent and yelled at him to sit down.

The chief appeared to be in a snarky mood throughout the night.

Earlier, Duggan had asked schools Superintendent Steven Stone, whose position is on a contract rather than Civil Service, how many students were in the schools. Stone responded from his front-row seat “about 3,700.”

At which point Richardson turned around, fixed Stone with a stare, and said “Oh, do you want to be police chief?”

The tenor of the meeting seemed to degrade as the debate went on, eventually prompting Town Moderator George Malliaros to cut short iscussion and declare that the vote would be taken by secret ballot to ensure that residents felt comfortable voting.

Boos again erupted from the Civil Service supporters. Someone in that section shouted that all voters should have to show their faces.