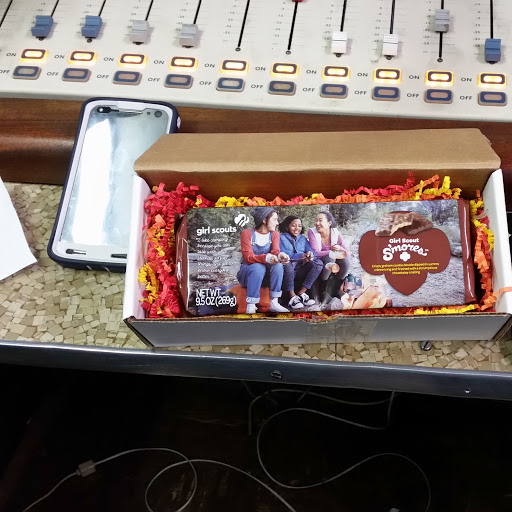 The Girl Scouts this year are bringing the summer to us just as the winter comes in.

Just after our annual Salvation Army Radiothon, I was contacted to see if we would like to sample the new Girl Scouts cookie for sale this year, “Girl Scout S’mores.”

The box arrived just in time for our last 980 WCAP Saturday Morning Radio Show program of the year, so we took a few minutes to try them out and see what everyone thought.

I originally wanted to hear from Jake Martin and Tim Bomil of 980 WCAP’s food show, “The First Course.”  Tim could not join us that morning, but Jake didn’t hesitate to grab some free cookies, giving our first opinion.

“Not being a big fan of s’mores, I was skeptical about how I would feel about the cookie; however I was pleasantly surprised at how delicious it was. It had a smooth taste, with no overbearing flavors.  After tasting the cookie I would definitely purchase a box and recommend it to others.”

Others liked the cookies, saything they were an acceptable new flavor.  Myself, I thought the texture of the cookies was similar to their mint cookies (my favorite), but with a graham flavor and wrapped in a milk chocolate rather than a dark chocolate (though still a hard shell, so they will last).

Saturday Morning Live host Warren Shaw, was just as positive as Jake, however, saying that even though he had long grown away from buying Girl Scout cookies (as his daughters have grown), if he were buying them today this would be his new favorite.

Taking them home to the family party the next day, everyone seemed to like them (though I admit I also had a bunch of homemade cookies around as well).

They could not compete with the chocolate crinkle cookies,  but face it, those took hours to make and a sink full of dishes to clean afterwards.

The young kids however loved these Girl Scout cookies, and will be looking for them along with all the old standard flavors still out there and on sale today to support the efforts of the local Girl Scout troops.