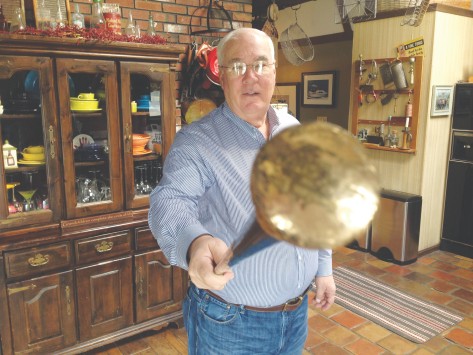 The Lowell Sun this morning has a more detailed story on the Boston Post Cane, where it came from, and how it came to be in the hands of Russ Taylor after all these years.

It was around 1955, and the young Taylor was with his aunt at her friend’s father’s house. The old man had recently died, and Taylor was helping the women clean out his leftover possessions.

“She wanted to give (the cane) to somebody young who would love it and appreciate it,” Taylor said of the daughter of the deceased. “I was absolutely enthralled by it.”

He took it home to Bridge Street and fought imaginary outlaws with it, just like Bat.

He didn’t take much notice when, about a year later, the Boston Post printed its last obituary, stopped its presses and closed.

But long after the newspaper died, one of its quirkier advertising promotions would live on.

The paper had sent 700 ebony canes with engraved gold tips to towns throughout New England. Each came with instructions to give the cane, with the Post’s compliments, to the oldest male resident.

When he died, the cane was to be passed to the next oldest living male, and so on and so forth.

At a recent Board of Selectmen’s meeting, Cathy Richardson mentioned that she was searching for the original Boston Post Cane, and was hoping to find a grant to have a similar recreation done. From that point, Taylor made it known where the cane was to the Town Manager and a few of the other Selectmen. Chairman Tony Archinski surprised Richardson at the next meeting with the announcement that it had been found.

Taylor is asking that a committee be formed to manage a permanent monument for the relic, as well as create a new tradition. Selectman Tami Dristilaros mentioned to me that they could possibly put together an annual event to honor the seniors in town, and make the honorary presentation of the cane be part of that event.